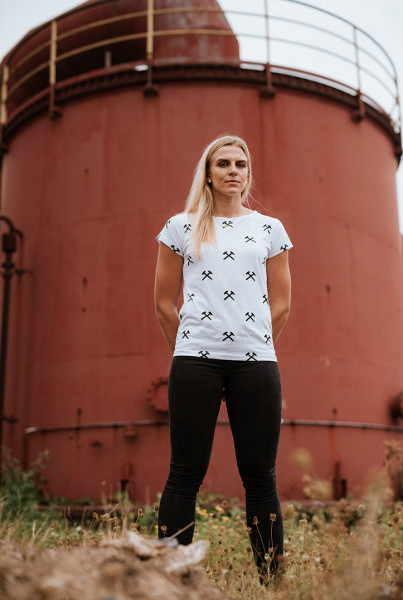 Annika Drazek refers to herself as "a genuine summer girl from the Ruhr area." Formerly a sprinter, however, she now does winter sports— as a bob sled pusher, she won both the World Championship and European Championship titles. In the interview with ÜBER TAGE, the 23-year-old speaks about home and wanderlust, her eventful life as an athlete, and the significance of social media.

Annika Drazek, you are from Gladbeck, making you a Ruhr native. Do you have a favorite place in your home area?

That would definitely be the Wittringen stadium in Gladbeck. I have been training there since I was eight years old. So you could say I grew up there—with all the positive and negative experiences that come with it.

You travel a lot professionally. What significance does the Ruhr area have for you?

I grew up in the Ruhr area, this is where my family lives, and I feel at home where my loved ones are. Still, in competitive sports it's crucial to be able to feel comfortable anywhere. That's the only way to access your capabilities as best possible. If you can't, you also won't be successful in the competition. It helps me that I like to travel and do so a lot. I'm especially attracted to warm locations. Through my discipline, I have learned to love winters, but I'm confronted with snow and cold temperatures so much that I like to go in a different direction in my spare time. Going on a two-week skiing vacation after a season would be absolutely out of the question for me.

Sports, we can tell, plays a dominant role in your life. Originally, you were a track and field athlete. How did your switch to winter sports come about?

My specialty disciplines in track and field are the 100-meter race and 100-meter hurdles. My trainer advised me early on to switch to bobsledding as soon as I was interested in something else. Being a summer sports athlete, though, the idea seemed very exotic to me at the time, and a long way off. Some time later, the current head coach of the German Bobsleigh, Luge, and Skeleton Federation saw me during a competition and also told me that I had certain potential. He, in turn, knows my trainer very well, so the two were already discussing my future back then. My trainer, though, argued for giving me a few more years in track and field to gain experiences and get some successes under my belt, which ultimately proved to be the right decision.

When were you ultimately ready to make this change?

In 2014, after an injury, I decided for myself that I needed a change. A new training regimen, for example, different input, and different people around me. Given the history, it lent itself to simply give bobsledding a try, so I drove to Winterberg for one day of pusher training.

Considering that I had no technique whatsoever on the sled yet, things went quite well. I then spent a day in Oberhof and sat in a sled for the first time with Anja Schneiderheinze. After all, I don't just have to push the bob, but also jump in and ride the track. For many, exactly this is the problem. During the ride, you have to duck down and can't see where you're going. So the initial experiences determine whether you decide to go on or not. For me, it was absolutely fine, and so my journey continued. Together with Anja Schneiderheinze, I became runner-up World Champion and World Champion. When she retired, I joined the team of Mariama Jamanka where I became the fastest pusher and hope to be able to keep up this level.

Victory and defeat are often just fractions of a second apart in your disciplines. How do you deal with failures?

I come to terms with them. During the Olympic Games, we didn't want to raise our hopes about winning a medal from the start to avoid a possible disappointment. Everything went so well until then, though, that I still secretly toyed with the idea of taking home a medal. We then missed it by eight hundredths of a second, literally only the blink of an eye. You have to face it, analyze what the problem was and, above, all, learn from it. Under no circumstances can you let it get you down, because a new opportunity will surely come around.

Your boyfriend Stefan Bötticher is also an athlete. What is it like for you when he is at the line-up?

I'm almost a bit more nervous than during my own competitions. Stefan is a track cyclist and has already garnered gold, silver and bronze in European Championships. I learn a lot from him, especially since he was completely out of the picture for two years following an injury after a successful career; but he pulled off an impressive comeback. He managed to stay relaxed and then give it all he can in the crucial moment—that's a genuine art. We support and complement each other very well.

Sports is also always about marketing. What role does social media play for you in this?

It has become brutally important, especially in the quest for sponsors or supporters. Of course the fans also have a greater interest in learning about the daily training routine. Often times, it's not about producing a lot of text, but instead to post good pictures. Bloggers and influencers invest a lot of time in Instagram profiles, and produce elaborate stories. Personally, though, I feel that you shouldn't allow yourself to be influenced too much by social media, despite the great benefit. Sometimes I just want to enjoy certain moments, without having to take pictures or videos. This definitely also includes moments with other people.

What values are important to you in dealing with others?

Honesty and loyalty—which is typical of the Ruhr area, and that's me too. I say what I think, wear my heart on my sleeve, and I'm generous with compliments. I feel that these days people don't pay enough compliments, and so their effect is even greater when you do voice them. The same goes for polite manners, for example when you greet a stranger in the streets. This brotherliness and sense of community that has shaped the Ruhr area over decades must not be lost.

Do you have any plans now for the time after your active career?

I'm currently enrolled in the sports promotion program of the federal police force and completed my training there this year. The police force is the backbone for my future. I intend to stay there after my active career, but you can never fully plan on anything. Additionally, I will travel a lot in my spare time—particularly to warmer destinations, especially in the winter.