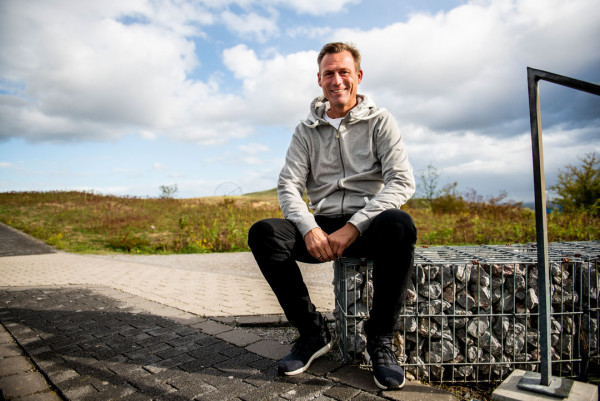 Ingo Anderbrügge for the first time learned the true meaning of home when he lived some 700 kilometers away from where he grew up. The former professional soccer player is a born-and-bred Ruhr native. He played for the Borussia Dortmund and Schalke 04 clubs, and he knows the contrasts that exist here in the Ruhr area. But he also understood what unites the Ruhr region, despite its incredibly multifaceted diversity, and the enormous hidden potential it has to offer.

Ingo Anderbrügge, what does home mean to you?

To me, the term 'home' first of all describes people. I equate coming home with seeing faces I grew up with or with whom I spend my day-to-day life. On a higher level, though, home is also about memories and experiences. So in my case, of course, I associate a lot of things with soccer, but as a result of my family certainly also with the mining industry. Home can also be a region, for sure. I lived in Bavaria for a year. The things you experience there are different—it's certainly nice there, but you can tell that it's not your home. When I was sitting in the car and saw the "NRW" sign, a feeling of security and warmth came over me.

Many people may not know what exactly in the Ruhr area you call home. Where do you come from originally?

I'm a Datteln boy. That's where I grew up, and today I still live in the district town of Recklinghausen.

You just briefly referenced the topic of mining. What connection do you have to the mining industry and coal?

My father started out as an underground coal miner, before eventually being able to retire from a career as a field engineer after a great deal of training and continuing education. When I was 16, he took me below ground in Waltrop. Wearing our helmets, we followed several smaller paths. I still remember very well that, afterwards, it took us easily three times as long to shower as it would normally. I also completed my apprenticeship as an industrial management assistant with a mining firm. And as a professional player in a registered league, I was able to play for both Borussia Dortmund and Schalke 04. We got to visit our fans underground, drink hard liquor with the miners afterwards and share experiences. Today, I can explain why the term 'butty' (buddy) is a synonym for miner. I was able to experience their willingness to help and work ethic as a child and adolescent, since I grew up with this generation and found that the street soccer everyone played in the past and mining have a lot in common.

But then you took a different path professionally and became a pro soccer player. How did this come about?

In soccer, people see you and invite you. When I played for Germania Datteln and on the Spielvereinigung Erkenschwick team, I made it on the district and Westphalia list. Through the Westphalia list, I had the opportunity to switch to Borussia Dortmund (BVB) during the last year on the 19 and under team. My first training with BVB was the last training performed by Michael Zorc and Ralf Loose, who had become European Championship winners as junior players on the German national team. This was something very special to me. After one year on the Dortmund 19 and under team, I was able to play for two years for the amateurs and then got to train with the pros in the second amateur year. Everything really went step by step. And I don't know whether my parents would have advised me to sign a contract with a professional soccer team when I was only 18 or 19 and still completing my apprenticeship.

But I ended up not having to decide between my education and soccer—as fate would have it. I worked as an industrial management assistant journeyman for six months, and only then came the professional player contract.

Was it a dream of yours to play for BVB?

You can't put it quite like that, although I was a professional player for Borussia Dortmund for four years. I likely would have joined another club too, since "the" Ruhr club didn't exist yet at the time.

Bayern München and Borussia Mönchengladbach were popular. My dad took me to the Bökelberg stadium as a child. And when you see somebody like Jupp Heynchkes, my idol, who was playing left wing, it just gets you excited. But then you become a contract player, and soccer becomes your job.

What came after the four years in Dortmund?

I was injured, not really able to get established, and several players had to go during this phase—including me. Several consultants contacted me, of course, and Waldhof Mannheim and the 1. FC Nürnberg club expressed an interest. Perhaps it was because of feeling bonded with my home that I didn't have quite the courage to step out of the Ruhr region. And then Horst Franz, who was Schalke's coach at the time, remembered me. I decided to take the step into the second division of professional football.

It took three years before I was back where I wanted to be on the starting lineup for Schalke, with the goal of playing in the first division. At Schalke, I was able to make a name for myself and be successful until 1997 or 2000.

You came to Schalke early on and won the UEFA Cup after nine years...

They picked up three players in 1988: Andreas Müller, Jens Lehmann and myself. We had the chance to be on the team until 1997 and developed together with the club and the team—from almost being relegated to winning the UEFA Cup. We still talk about it today, 21 years later.

Are you still in contact with many of the former players from back then?

As a result of my being a representative for Schalke, we often run into each other. After all, soccer is what we all have in common. I see Martin Max or Olaf Thon on a regular basis. On occasion, some new faces show up at the annual "meeting of the legends." Schalke is always an anchor for these get-togethers. And when you look at the team from 1997 and what the players do today, you can see very well the caliber of people we had on this team.

What is your favorite place in the Ruhr area?

That depends a bit on my mood. I love bicycling the trails of the former railway lines, or standing on a spoil tip. Of course, then there are the stadiums, and soccer. Every one of these has its own special attraction, and it depends what you make of it.

Where do you see the Ruhr region in the next five to ten years?

I can explain this well based on my own soccer team "Ruhrpotthelden", initiated through networking efforts. Their goal is to make good things happen. The Ruhr Metropolis, which very impressively demonstrates the power that the 'Ruhrpott' region has to offer, is a partner of our association. Unfortunately, this term often has a negative connotation outside the region. So perhaps it is better to refer to it as a "metropolis" or "city of the cities." And it has a stronger magnetism than Berlin. As a boy from the Ruhr, I want to spread the region's values. I'm convinced that, in the medium term, we will be able to pool forces across cities, that major firms will discover the magnetism, and that the Ruhr Metropolis can be Germany's most up-and-coming region. If we can help make this a success, that's great. We must preserve what our fathers have built. We have to be grateful and help ensure that these values remain characteristic of the Ruhr region in the future as well.